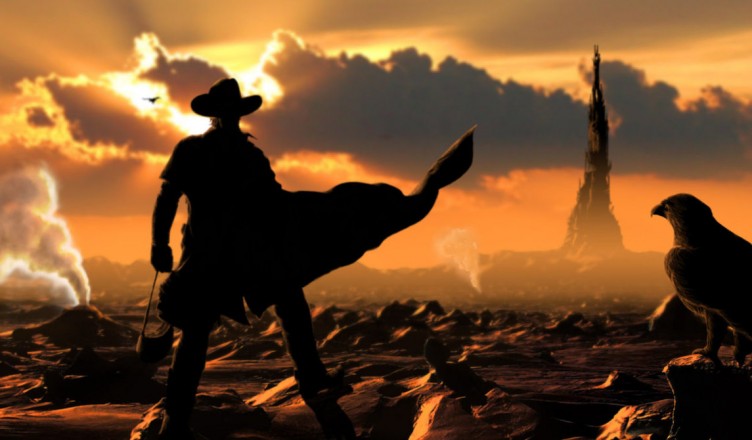 With Sony Pictures taking the bold step of publishing a release date for the first Dark Tower movie, it struck me that the next two Bad Boys movies were getting higher billing than Stephen King’s magnum opus in the articles in which I read about it. Although Stephen King is arguably the most recognized author in the world, his Dark Tower series is not very well-known outside his “constant reader” fanbase. If the plans for this movie series (with possible TV tie-ins) are ever going to work, that has to change, and fast. Since these are movies –I– want to see, tickets need to be sold and I am here to help make that happen. Here’s what you need to know: 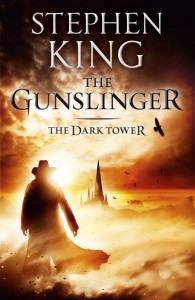 The book: Stephen King believes the best opening line he ever wrote is the first sentence to The Gunslinger: “The Man in Black fled across the desert, and the gunslinger followed.” The novel was first released starting in 1978 by sections in The Magazine of Fantasy & Science Fiction before being released as a complete novel in 1982. It’s a mash-up of Robert Browning’s “Childe Roland to the Dark Tower Came” and Clint Eastwood’s characters from his spaghetti western days.

The setting: It’s a world that’s moved on. The land we see is called Mid-World and it’s a nasty place, resembling a completely blown-out, post-apocalyptic Earth. Technology is somewhere around 1900: there are horse drawn wagons, five and six shot revolvers, and almost no working electricity. There are little bits of semi-functional high technology scattered around, but no one relies on any of it. High-tech devices are more like artifacts from a silly, bygone age and best left to rot. Although there are no cars, our travelers come across derelict oil fields and gas stations. It’s almost like our world continued on to some very high tech-future and then destroyed itself, reducing society to this antiquated state. There are fantastic elements like magic and spirits, but they are in same state of decay as everything else. Whatever happened, it made the land hard and changed the people.

The people: If what I described above sounds like Mad Max without the cars, I think you’re on the right track. Now take the number of people you expect to run into in that setting by and divide it by about 100. Mid-World is a very empty place. The people we find are physically and mentally scarred. Their perception of time and direction is elastic, giving them all an indistinct sense of their own place in the world. There aren’t enough people around and enough know-how persisting to fix anything, let alone create anything new. They all know they are downslope of human history. Plus, there are slow-mutants, mankind’s devolved cousins to contend with. 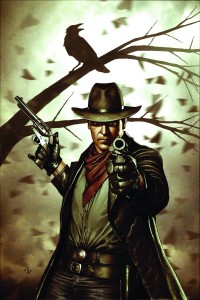 The Gunslinger: The main character, Roland Deschain, stands apart from all others. He is the last Gunslinger, a kind of knight and statesman from a land he calls Gilead. If the world hadn’t moved on, Roland may have been a king, and he would not be alone now. He’s a very hard man who maintains a code of honor and fairness, so long as you stay out of his way. He was raised to be the way he is, and as a result, believes almost any problem can be solved with the generous application of gunfire from the pair of revolvers he inherited from his father. His quest is to reach the Dark Tower, a near-mythical nexus of power in his world where he believes everything can be set to rights again. To get there, he needs to catch the Man in Black, a figure he believes knows the way, and was instrumental in destroying the world he knew.

The Man in Black: Roland’s nemesis. Where Roland relies on his talented hands and intuition to survive, the Man in Black is a methodical thinker and planner and worse for Roland, a sorcerer. He is well aware of Roland on his trail and leaves traps behind that aren’t designed to kill Roland, but rather to discourage and scar him.

Jake Chambers: An eleven-year-old New Yorker that the Man in Black places in Mid-World, and in Roland’s path, after dying in ours. He is a stranger to Mid-world and will surely die (again) if Roland doesn’t help him.

Why it’s all awesome: This is just the first, tiny part of the story. If this movie works, we’ll get to see how Mid-World relates to our world, more about Gilead, a psychotic, artificially intelligent monorail named Blaine, and maybe, if you’re good, the Dark Tower itself. Doesn’t that sound like fun?