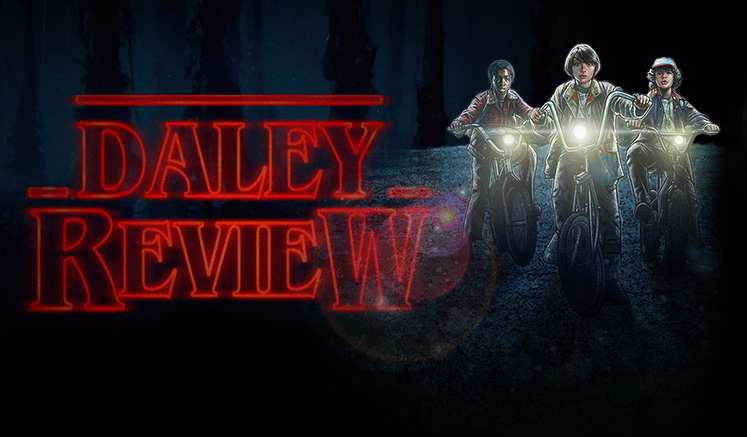 The tempo of the series starts to pick up with Hopper’s invasion of Hawkins Labs. I haven’t followed any of David Harbour’s work before now, but he brings a very large, very physical presence to his scenes. It makes for believable action and an endearing character. Even though he’s captured and delayed in a little swamp of self-doubt in his cabin, he picks himself up and gets the story moving again by making it to Joyce’s to spill his guts. I love this. Lonnie’s influence may have delayed Jonathon’s ability to confer with his mom, but after Joyce ably kicks him to the curb, she’s all ears when Hopper shows up. And the plot keeps moving!

After Will’s funeral, 11 has the boys chasing their tails after Professor Dustin Compassman schools them on proper compass functioning. She doesn’t want anyone to get hurt. Until she does, that is. And then, so looooong, Lucas. Chagrined at having knocked out one her friends cold, she bolts.

Meanwhile, Jon and Nancy take in the fall colors with a little shooting practice and ill-prepared monster hunting. Then again, who would ever be prepared to crawl through a bloody tree hole and an unguided tour in the upside down forest? Nancy falls into the same category as most of us and looks like she will need some help from a suddenly hearing and directionally impaired Jon.

This episode flies by, pleading with you to just binge the rest of the series. Savor this one for e second though. It’s got enough funny and enough action to stand out as one of my favorites so far. This is a pretty short podcast for us, matching the pace of this great episode.