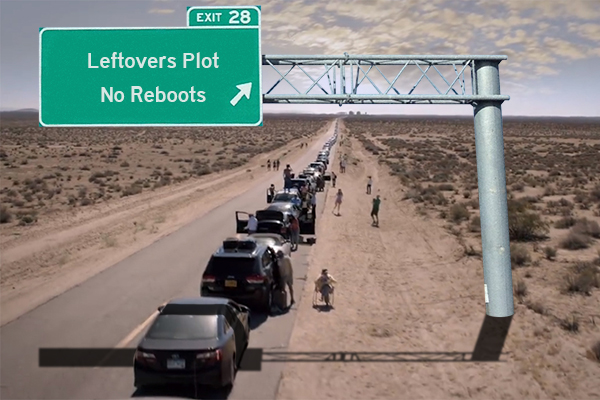 HBO, Damon Lindelof, and the gang are hard at work outside Austin producing the next season of The Leftovers. Having come to The Leftovers late, I learned about the changes being made to the show almost right after I finished watching the first season. The articles I found all called the second season a”soft reboot”. I’d like to know where that term got thrown into the mix; was it HBO or someone else?

Reboots reek of failure. (Apply whatever metric makes the most sense: financial, critical, the honchos just hate it, whatever.) That’s not a hard and fast rule, but it almost always applies when a rebooted piece of media (movies usually) is produced while the previous version is still in recent memory. HBO is not a charity. If the first season failed, they would not have ordered a second season.

Reboots also rewite history within the continuity of that narrative, basically making a whole new narrative. Another way to say that is whatever you saw before doesn’t count and only what you see in the new version matters. How could that possbily be the case here? The “soft” part of soft reboot usually means that a new viewer should be able to pick up with the new movie or show without knowing what transpired before and still understand what’s going on. Again, how could that apply here?

What little people know about season 2 indicates that a core group of Kevin, Nora, Jill and Holy Wayne Jr. are moving to Texas. It’s unknown what role, if any, the townspeople of Mapleton, like Matt Jamison, Meg or Kevin’s father will play with the group being so far removed. When a new viewer sees this vagabond group of New Yorkers with a baby whose heritage clearly doesn’t match any of the adults with it make their way into Texas, they’re going to have questions. In a reboot situation, the viewer would just have to pick it up from Season 2 Episode 1 forward. I doubt that the writers will be able to use the same “TV news as exposition and backstory filler” technique they used in Season 1 to explain all that.

My bet is that “reboot” was applied here as a way to get attention to the article originating the idea. Was LOST “rebooting” when Jack, Kate and the rest made it back to civilization? No. This is the same kind of plot development. When I first heard of the move to Texas, the first thing I thought was that it made a lot of sense. Kevin, the chief of police, was off in the woods burying a body that, although he didn’t kill her, wouldn’t have been in the woods and in that spot if not for him. Mapleton then went insane when the townspeople reacted to the GR’s “Grand Gesture”. Multiple houses burned and many people were beaten and probably killed. In all likelihood, Kevin is out of a job. Nora, the other adult we know is coming to Texas, was already packed to go. She just needed to pick Holy Wayne Jr. up some diapers on the way out of town.

Battlestar Galactica: The original show ran for one season and was canceled because it was too expensive to make. It was campy and an unabashed attempt to get in on the hunger for anything resembling Star Wars at the time. The reboot took the names of the characters, a tiny slice of the mythology and the basic situation (former robot slaves decide to eradicate their onetime human masters) and rebuilt it from there. A definite “Hard” reboot and successfully done.

Marvel’s Incredible Hulk: Marvel’s comic book movies had gotten off to a good start with Blade and X-Men. Then a few stumbles came. This was before Marvel became devoted to the Marvel Cinematic Universe and was still pretty happy just to have movies with big stars in them. Hulk (2003) came out and baffled audiences. It had a huge opening and then an unheard of, legendary drop in attendance for week two. The Incredible Hulk was produced five years later, complete with a new telling of the origin story (a sure sign of a reboot).

Batman: The series of movies that started with Michael Keaton as Batman and included Val Kilmer and George Clooney also donning the cowl helped kill comic book movies in the late 90s. The last of these came in 1997 complete with Batman armor that included detailed nipple protection. This series helps define why reboots need to happen for some properties. It started super strong and ended as a self-parody. Batman Begins came out in 2005 and redefined (especially with its sequel The Dark Knight) what people would come to expect from comic book movies.

Star Trek: This is a terrific example of a reboot AND Damon helped write it! The classic series always had more legs than the other incarnations of Trek. The filmmakers wanted a way to honor the original stories, characters, and the work it took to make them happen -AND- still be able to tell new stories with actors playing those roles that weren’t septuagenarians (at least). Using a time travel gimmick, it works out that they had their cake and beamed it up, too. The original stories existed in one narrative continuity and the new stories take place in a new one after a branching of the timeline. No biggie.