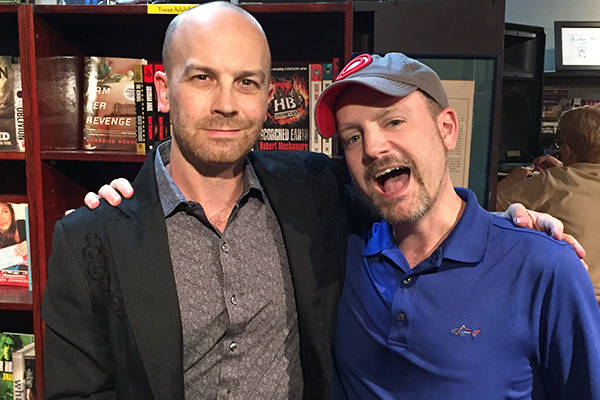 Last Friday, author Scott Sigler stopped in Houston, TX, on his whirlwind tour for his new YA novel Alive. Caroline and I made our way to Murder By The Book, probably the most awesome bookstore in Houston, to hear what the Future Dark Overlord had to say about the new book, his career, his plans and anything else he wanted. I’d been to one other Sigler-stop in Houston, when he went on a similar tour for Nocturnal. This was Caroline’s first time.

Scott got right to business by reading the first chapter from his new novel. Lucky for Scott, the female narrator doesn’t speak in the first chapter. (He explained that they recorded a couple chapters with him as narrator and everyone involved was too creeped out to consider continuing. It was done more to prove that hiring a female narrator was the only way to go.) I have enjoyed every book of Scott’s that he has read, but I agree whole-heartedly that hiring a woman to read the part was the only way to go.

Finishing that, he answered some questions from the crowd. Some points of interest:

After questions, he started signing books. I’ve included a picture of myself with Scott with this article, shot just after he signed my book.

Alive is Scott Sigler’s first stab into the very happening YA (Young Adult) market. This book is aimed squarely at the Hunger Games, Divergent, Maze Runner-type reader. I’ve read (listened to, actually) most of Scott’s work: All the GFL books, Nocturnal, Ancestor, the Infected trilogy, the short story collections and at least one novella. While Alive definitely has Scott’s style and some very familiar Sigler-isms, it also felt like a departure. What do I mean? Let’s take a look.

Scott likes to kill characters. He goes through so many of them that he harvests new names from the user names on his own forums to become redshirt murder victims. (That’s a cool thing – don’t stop). I’m not going to write a spoilery review here, but I kept waiting for more people to die. There were two characters in particular that, if this were not a YA novel slotted for a trilogy, he would have killed or at least horribly disfigured.

Scott likes to describe things with a lot of detail. There are bits and pieces of that familiar level of detail, but overall I get the feeling it was cut. During his talk, he said as much. He wasn’t specific about the kind of content cut from the book, only that this book was a more deliberate attempt to be as lean as possible. I missed it.

Scott goes gory. But not here. Yes, people get hurt in pretty standard ways in Alive. If you’re looking to see if he can top the dog-mutant biting the head off the police chief’s husband from Nocturnal, you’ll need to wait until he finishes the trilogy. I don’t know if the PG-13 violence is part and parcel of the YA genre, but Scott is definitely restrained here.

On its own merits, it’s a likable book with a strong main character. I listened to the audio version and the narrator provided an intensity and constant sense of urgency that served the plot well. The main characters get enough depth so that you can tell them apart by what they say and the actions they take. The narrator gives the reader a good, believable balance between being completely confused and possessing strong, underlying determination. It’s very fast paced in how it has to manifest, but her internal struggle makes sense. That last part is potentially a short-coming of mine playing into how well I could relate to the character though.

Here’s the thing: teenage girls are my least relatable POV / narrator. I’ve started and had to quit books because I just couldn’t keep reading about boy issues. Scott has also cursed his narrator with issues, but it wasn’t an overwhelming factor. Survival was always the first priority for M Savage (our narrator) and whether the cute, hulking and magnetic in oh-so-different-ways love interests noticed her smile at them was always second. Thanks be for that.

There are some elements that are somewhere on the spectrum between trope and formula for the genre. There are adults out to get them. There’s memory loss. There’s a caste system (although only hinted at). There’s budding sexual tension held at bay by more pressing emergencies. If this were your first YA novel, those things might seem fresh. If this is your second or third, they’re more like expected signposts to help a strange new environment feel more familiar. Scott’s spin on these tropes is his own, but they’re still the same tropes at heart.

I’d easily recommend this book to anyone that enjoys the tried and true “what’s so special about me” approach of today’s YA sci-fi genre. For Scott Sigler fan (junkies) looking for the latest hit, they’ll find it here, but reigned in some. Either way, I’ll keep reading as the new novels come out.