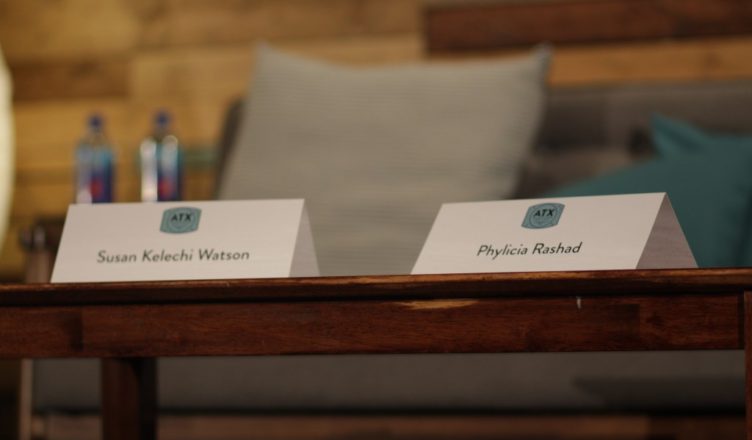 So much happened today. For real. Your intrepid reporting team had to split up to cover more so we could bring you more highlights from this year’s fest.

First up, A Playwright Walks Into A Writers Room. Have you ever wondered where television screenwriters come from? It turns out, many writers and showrunners originated as playwrights. Alexander Woo (The Terror) said that he originally wanted to tell his stories as a novelist, but turned to writing plays because he enjoyed the collaborative nature of the theater. The other writers agreed, finding the organic melding of writing and live performance something they all enjoyed.

A New Show You Should Watch: Perpetual Grace, LTD.

Wow. Really. This show in no way resembles anything else on TV right now. When I left, I thought I’d seen a story written by Quentin Tarantino that had been shot by Wes Anderson. Since I love both of those filmmakers, you should know that’s a compliment. It’s quirky visually, quirkier in dialog, but really. Seeing Sir Ben Kingsley deliver a profanity-laden tirade from a Mexican prison cell made me want to go find Epix and subscribe.

Los Espookys: Behind the Scenes on Every Scooby Doo Caper

Fred Armisen, best known from his days on Saturday Night Live, brought his new HBO show to ATX. He pitched the audience on the idea that behind every elaborate scheme on Scooby Doo, someone had to rig the fake ghosts to swing around and make the fake fog spill over the swamp. That where Los Espookys comes in. If you’re an evil land developer and want to scare people off the land you want, call Los Espookys and they’ll take care of it. One important note: the show is mostly in Spanish with English subtitles. This one of a kind format ADDS to the show’s humor for unilingual English speakers. Give it a shot.

Having attended ATX for the last five years running, I’m ashamed to say I’ve never attended one of their lifetime achievement awards. I’m glad Phylicia Rashad was my first. Her presence? Elegant and charming. Her career? More impressive than you knew. Listening to her answer the questions posed to her by her This Is Us TV daughter Susan Kelechi Watson will persist as one of the highlights I’ve ever experienced at the festival. When ATX releases the podcast of the event, I’d recommend checking it out.

Armed with three never before seen clips from the upcoming season of Drunk History, show creator Derek Waters ran a unique panel with several celebrities in attendance. Colin Hanks, Doug Jones, and Lyric Lewis all appeared on stage with Waters as he presented clips of them re-enacting events of dubious historical merit. The crowd loved both the clips and the interactions among the creators. Noted Snoop Dogg fan Colin Hanks at one point had to straighten Waters out on whether or not one “drops it like it’s ‘hard’ or ‘hot’”. “It’s hot,” Hanks instructed with aplomb and tons of audience laughter. Check out the next season, premiering 6/18!